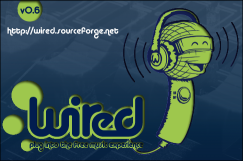 This is an interesting project I was helping some time ago.

I’m always interested in free, but yet good, solutions for digital audio, and I was frustrated by the lack of this kind of software, specially for Windows. But even when something really good shows up, some bigger company buys the development studio or hires the developer(s) to work on another project.

The other day I was surfing on SourceForge, looking for a free and useable host for Windows, and stumbled upon this project in early stage of development by students of EPITECH (European Institute of Information Technology) as a regular discipline of degree. I wanted a simple Digital Audio Workstation, of the Kind that “just works”, and I think I got it from Wired: active development (at that time), beautiful site, nice screenshots, etc. But there was a problem: it was for Linux only. Not relly bad, actually, but if it was for Windows, it would be better.

We already had some interesting and solid options of DAW for Linux, but none likely of be ported to Windows. So, I’ve begun analyzing the Wired source code, doing some tests and asking the developers about this possibility. After the analysis I came to a conclusion: I can do that. The application was based on multiplatform libraries, in special wxWidgets and portaudio, for that reason, it wouldn’t be much difficult to port it. While I’ve started the porting I was also talking to the Wired staff to show some initial results, until the day of which the guys gave me permission to commit into their repository. From that point, many hours have been spent… 😉 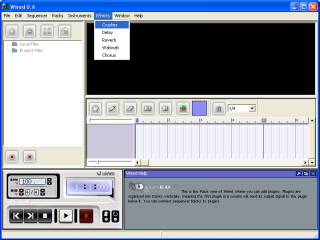 For those who want to try it but don’t want to compile it by themselves (it isn’t simple for regular users), here is the installer of the latest snapshot.